January 20, 2007
Last weekend was a whirlwind trip in and around Atlanta with college pal Val. It was a bit more driving than I usually like, for one - I HATE driving in Atlanta. I avoided two major accidents, one not my fault and the other would have been my fault. Damn those unmarked one-way streets! And two, I enjoy taking my time and experiencing something vs. jumping out and looking around.

The weekend included a visit to the Georgia Aquarium, which happens to be the world's largest aquarium. Okay, I would have thought a facility on the water would be larger, but apparently not.

We happened to be there the day after Ralph, a whale shark, moved on to the big sea in the sky (he died). The media were in full-force covering the story because earlier in the year, Gasper, a beluga whale, was euthanized for bone cancer. We spent a good amount of time there, splashing in the touch tanks ("please only use two fingers"), taking in the exhibits and enjoying lunch. (Enjoyed a reasonably-priced and tasty mushroom and goat cheese pizza).

Highlights included the penguin exhibit: I was able to be PART of the penguin exhibit by crawling on my hands and knees (yes, I realize it's probably meant for kids) and popping up into an over sized plastic tube. It was pretty cool to see the little tuxedo-clad birds waddling around. My advice to the Aquarium, though - get new plastic. It was a bit scratched up. The beluga whales were kinda cool, too. One would blow out a bubble (almost like a smoke ring), chase it and swallow it. The jelly fish were magnificent, too (pictured below).

Later was a walk through Centennial Olympic Park for some Kodak moments and stop at the visitor center. We told them we were heading to CNN and were given a discount card good for $1 off each tour. Hey, every bit helps! We also picked up a map which had a coupon valid at the Atlanta Zoo, which was utilized the next day.

And so it was off to CNN for a tour. I'd taken the VIP version of the tour many years ago and things have changed a bit. The VIP tour is no longer offered, no more going into the studio. It was still worthwhile. Being a HUGE Anderson Cooper fan, I had to pose with him (see photo below).

I then discovered the joy (and disappointment) of shopping at Ikea. I think we spent three hours here, it was overwhelming. Scored some cool deals but was truly disappointed when I found something on clearance reduced to $38 from $298 but couldn't find all the parts! See, if you're purchasing furniture, you buy the pieces then have to put it together. Being a Swedish company, we enjoyed a plate of Swedish meatballs (again, reasonably priced).

Atlantic Station was next, Atlanta's newest shopping and dining district. After circling the parking area for what seemed like 30 minutes, we found a place and enjoyed pomegranate margaritas and kick-ass guacamole at Rosa Mexicano Being a Friday night it was hopping and an hour wait for a table. We were lucky to find a setting at the bar.

Saturday we spent the morning at Zoo Atlanta to meet Mei Lan, the new panda cub who made her debut that weekend. Afterwards, we attempted to visit the Martin Luther King, Jr. Memorial and take part in the festivities, since it was the weekend of his birthday. Bottom line, things didn't work out. We found it once but didn't realize it was it. Drove around for a while, almost caused a major accident, found it again but unable to find a parking spot, I left frustrated. It was the one thing I really wanted to do over the weekend. It just won't be the same if I visit any other weekend. *sigh*

Quick stop at the Jimmy Carter National Library - which is part of the museum and since we had to pay, I opted to pass. Chateau Elan Winery was the last of the tourist things to do. It was built to replicate a French castle. Oui! Oui! Tight on time, enjoyed the $5 wine tasting and restocked my wine collection.

More images can be viewed here. 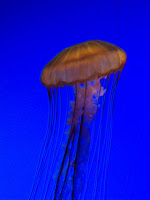 jhuber7672 said…
I forgot to mention an annoyance at the Georgia Aquarium. The brand new packet of chewing gum in my purse was confiscated! The experience was worse than going through airport security. I understand the logic in keeping gum away from the animals but I didn't understand the inconsistency in searches. Val WAS able to bring her gum in.
January 28, 2007 5:51 PM