Clowning Around in Sarasota: Beware

November 12, 2006
I've heard the hype about the clowns coming to Sarasota, Fla. this year. While Boston had cows this summer, Cincinnati had pigs long ago, Sarasota opted for colorful clowns to decorate the downtown. Which makes sense, it's where circus magnate John Ringling wintered his circus.

TideWell Hospice is the benefactor of the proceeds generated by the clowns. Organizations in Sarasota sponsored artists to create beautiful masterpieces, or so I thought.

I had read about the clowns being destroyed. Appendages have been sawed off. Accessories have been stolen. Some people object to them because of a legitimate fear of clowns while others object because clowns aren't art. Prior to seeing the clowns, I was all for them, picturing an Emmett Kelly-type clown. After all, clowns are a part of Sarasota's circus heritage.

But, to my "surprise," the clowns I saw on the streets of Sarasota were pretty freaky. The female clowns are half leaning - pushing out their chests, sticking out their butts and look like they're hyped up on steroids. The men have innocent, wimpy looking faces with a hint of creepiness. Their guts are round, pot bellies. If you haven't been to Sarasota, let these images help you decided: 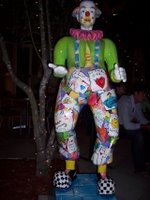 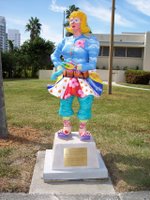 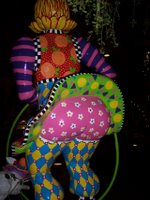 florida travel things to do in sarasota