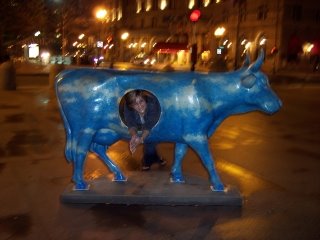 My college friend Val is asking friends to share their favorite/memorable moment with her. Well, here's mine:

We met freshmen year of college. She grew up in a town near mine, so one cold, snowy Friday, I caught a ride home with her. The road was dark, a little icy and somewhere in our hour trek with our dirty laundry in the back seat, an oncoming car wouldn't turn his brights off. So Val flicked hers, a little too hard, and she ended up handing me the "wand." (What is that thing called? That controls the lights?). Oops! The headlights were gone. It was dark. What are two college gals to do? Luckily, we were near a gas station and some nice man easily repaired the problem.

There are many, many, MANY other memories with Val. Like the time she, Gina and I had dreams of becoming famous performers; something like growing our armpit hair long enough to braid it to tie tiny bells, causing a "jingling" sound. OK, you had to be there.

Or, there's the time with Dan and Andy. Well, many times with Dan and Andy (aka: Dandy). My favorite was our trip to Canada: having them sit in the middle of the Niagara River on a picnic table posing for a photo; dancing in the clubs; and of course, can't forget the Beer Store.

Val sparked my political bone. Yes, we ran for dorm officer positions sophomore year. But, the smart gals (that would be us) lost to the pretty girls (the sluts). No bitterness. No. None at all.

But the memories didn't end after college. We went our separate ways, got married, moved to different states. But thankfully, what goes around, comes around. We're again sassy, single gals and have reconnected a lot over the past couple of years.

The above photo is Val in Boston. All I'll say is, some things just seem like a good idea at 1 a.m.
quirky travel