Scrubbed! But I Found Christmas

July 03, 2006
The STS-121 Space Shuttle launch was scrubbed yesterday and rescheduled to launch tomorrow. Although it would be pretty cool to be at the launch for a Fourth of July lift-off, don't think I can make the LONG drive again. Oh, well. There's another launch scheduled in August. 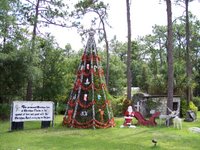 I did, however, get to see Christmas, Florida. I've always heard of it, but really didn't realize it's located on the very eastern edge of Orange County on Hwy. 50. Cattle roam rather than reindeer. Streets are named "St. Nicholas," "Cupid," and "Blitzen." A Christmas tree is decorated year-round and garland and lights drip off the homes of some of the residents. Ft. Christmas was erected during the Seminole War on December 25, 1837. The fort is on display at the county-run historical site, along with other buildings from that era. 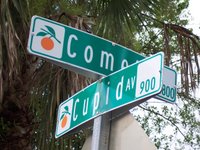