July 02, 2006
Like yesterday, my day began around 5:30 a.m. Not by choice. A horrible, blarring alarm startled me - I thought it was the alarm clock. After playing with it, I heard an announcement coming out of the wall. "A fire has been detected in the building. Please evacuate immediately."

Within three minutes of the hearing the announcement, I was one of a dozen people standing outside. Mind you, I was staying on the 12th floor. Other guests wandered down - some fully dressed and others with luggage (ok, I did grab one bag - but again, I was out of the building within 3 minutes) as late as 20 minutes from the initial alarm. 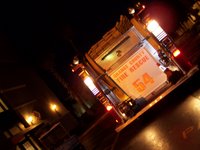 There wasn't a fire, I'm not sure what it was. But the Orange County Fire Department did clear the building. I was back in bed by 6:30 a.m.

Until my work phone rang at 7:30 - wrong number. A visit to the bathroom to discover the toilet is plugged up and back to sleep...

ARGH! I didn't have a do not disturb sign in the room so I ASSUMED housekeeping didn't clean rooms until the computer told them they were vacant.

She apologized and asked what time I would be checking out. I tried to count to "10" in Spanish but kept counting in Japanese (the few words in Japanese that I can remember are numbers) and gave up and told her in English.

Seeing an opportune time to ask for a toilet plunger, I asked. It's obviously not "plungero" because she handed me a roll of toilet paper. Well, that was probably what caused the blockage - by a previous guest. "No," I told her.

"Sorry, I do not understand English."

I then used hand gestures to mimic a plunger. She still didn't understand and after investigating her cart, she didn't have one.

Now I head back over to the Space Center for a 30% chance of a Shuttle launch. *Sigh.* Me thinks I won't be seeing this Space Shuttle lift off.