Thanks to Boston, I'm a Changed Woman 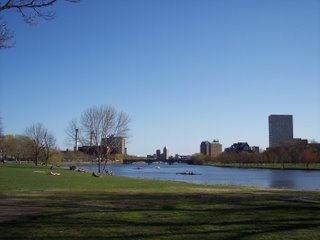 Ahhh, Boston in the spring is a beautiful thing. Tulips, daffodils and lilacs are blooming; the fingertips of trees balance bright green buds; young 30-something-men (LOTS of them) canvass the sidewalks and jogging paths; and play ball! The town's beloved Red Sox are in full swing.

But, for anyone who's traveled to Beantown knows, the streets are not safe. I'm not talking about crime, although, there were two shoot-outs in Boston proper during my visit. I'm referring to the driving.

Simply put, Boston drivers are MANIACS. I've driven in Los Angeles and Chicago and have been afraid to drive through Manhattan, but after successfully navigating (well, by successful, I mean I was able to find the rental car agency on Friday) Boston without receiving a single ding, dent or scrape on my vehicle, I can handle the Big Apple.

There are two issues:
One: The Big Dig (BD). The city has been torn up for years in order to, well, I'm not sure what the purpose of the BD is, other than to confuse visitors coming into the city. Because of the BD, two-way streets have been converted to one-ways and roads have been closed off. I suppose the BD could be used to boost population levels, especially those who are extremely navigationally challenged. People can find their way downtown (usually) but cannot find their way out. These poor souls are then utilized as service employees or the real unfortunate ones end up as beggars on the street corners. Listen to them carefully, they aren't asking for money, they're asking for a way OUT of the city.

Two: Drivers are extremely aggressive and traffic rules seem to be nonexistent. The only rule I witnessed police enforcing was the pedestrian right-of-way-upon-entering-a-cross-walk law. Other than that, the cops probably figured, "Hell, I'm not getting on that freeway to chase down a speeding who cut off a half dozen cars. There are crazy drivers around here."

I was intimidated the first couple of days driving - and I had a navigational system. But by the third day, I became one of them. The aggressive driver bug bit me sometime early on Wednesday when I went to make a right-hand turn with my boat (she was a Pacifica who my industry partners and I named Flo). As I saw a clearing, a little red bug of a car had snuck up between me and the curb. I would have squashed her. I was dismayed how this little miss priss saw 6 inches and decided to squeeze in there. From that point on, I closed any possible gaps when making a turn.

If you're heading to Boston soon, here are some driving tips to keep in mind:

Lanes are guidelines. You'll find some areas where the lane lines don't exist. Just keep the hands at ten and two and the steering wheel and keep on going. Don't mind that there is a 18-wheeler about to ram you into the cement wall of the tunnel, just keep on going.

Traffic lights are to accent the natural scenery. Bostonians must want to celebrate Christmas year-round with these lights. If you stop for a red light, don't be alarmed that cars on either side of you will continue through the intersection. Do what makes you comfortable. Oh, and the yield on green arrow law is suppose to exist, but it doesn't. And, if you need to make a left turn in an intersection that doesn't have a green arrow, you just go as soon as the light turns green - just put your foot on the gas pedal, close your eyes, pray and go.

It's acceptable to make a right-hand turn from the fourth left lane. Best thing is, no need to use your directional signal!

Drivers are extremely friendly on the Boston streets and freeways. Many people waved - but tragically, noticed many people have only one finger.

If possible, do not drive! Hotels usually have shuttles or there is a public train line. It's truly a great walking city. Taxis are plentiful, too.

Why did we name the car Flo? Well, the navigational system spoke to us and directed me on where to turn. She never talked back, never scolded me for taking a wrong turn (she politely recalulated a route) and never (hardly) steered us wrong. Initially she was named Florence but decided Flo was a sassier name. We learned quickly to go with the Flo...