Waiting to Exhale (And Finally Inhaling)

February 07, 2006
I spent the past four days in the confines of the Gaylord Opryland in Nashville, TN. I've never been to Arizona's Biosphere 2 (although, I've been intrigued about the project since it's inception and was disappointed with its downfall), but imagine the Gaylord Opryland is very similar. After all, there is no need to leave the "compound," to the visitor, it's totally self-contained with shopping, dining, sleeping and recreation. It even has a river flowing through the middle of the facilities which contained the water from more than 1,700 bodies fo water throughout the world. 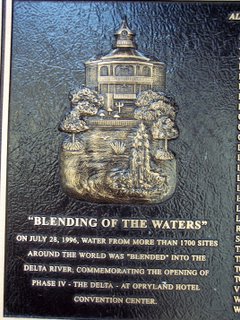 A glass dome encompasses everything and there is greenery everywhere. Daffodils, crocuses and hyacinth, were blooming, alongside magnolias and tropical foliage. Birds swoop down picking up the bread crumbs left by weary guests (in which they left to find their ways back to their rooms). Fish swim in the man-made circle - being the south, I'm really surprised they don't offer fishing!

Oddly, the tree fronds rustled in a wind. A man-made wind is pumped in by vents carved into the man-made rock formations. After a while, I came to realize I was breathing circulated air. It's worse enough that I had to sit in airports and planes with circulated air, but spend the entire four days within it was disconcerting. However, makes me wonder if the Gaylord folks are the innovators in a sustainable society.

You can read about my previous visit to the Gaylord Opryland here.