Jealousy: Not Just for Humans 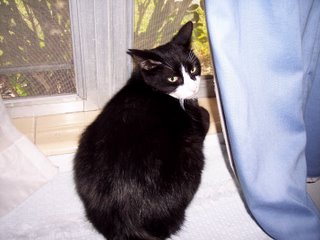 I haven't seen "March of the Penguins" yet, but from what I've heard, the penguins act very much like humans and seem to have human emotional qualities. Do they ever get jealous? Does a boy penguin's feathers get ruffled when the girl penguin he has a crush on goes after another tuxedo-clad bird?

Pictured here is Buggy, a friend's kitty. I'm his Aunt Jenn who's cat-sat for him, fed him, taken him on walks and given him love until he purrs. Last night, he turned into Cujo Kitty within seconds.

Now, it's not his fault. I did do something to upset him and was forewarned. A little black kitty came meowing to my friend's window. We went to take a look at her and she kept crying and wanted some love. My friends suggested maybe it was a sign to take this little kitty home with me. On the patio, I sat with her a bit and was cautioned, "don't let Buggy see you." My friend fed the stray and he told me that Buggy had once attacked him for feeding another stray cat, so much so that he had to miss a day of work from his arm being so swollen.

I returned inside the house and Bug sniffed me over and accepted me back into his home. Things were quiet until the little black cat came back to the windows crying. This time, Buggy ran to the window screaming and attacked the screen. He was pulled away with claws extended and fur puffed out.

He then sat next to the sofa and as I walked past on my way to the bathroom, he howled and lunged at him, gripping his claws into my leg, biting and scratching! There was commotion - yelling, screaming (me and the cat) and I shook him off. I stood in the entryway of the bathroom to look back at him - he was a big puff ball getting ready to charge at me when my friend stepped in.

Laughing, I locked myself in the bathroom, changed cloths, washed away any scent of the nighttime visitor and tended to my wounds. We later made up and this morning, he curled up next time and purred his content.

The only explanation we came up with for Buggy's actions was that he was jealous of the other kitty. There's no rational for jealously, whether you're a penguin, cat or human...