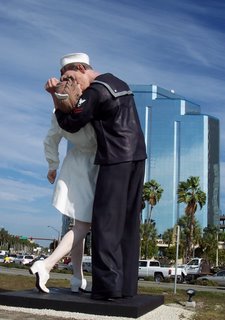 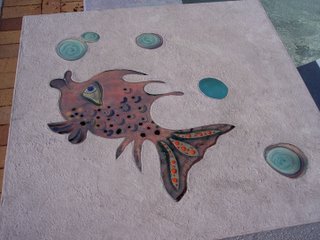 I consider Sarasota, Fla. my second home (Buffalo, NY, my first). Only living there for about four years, I spent many spring breaks visiting my grandparents while growing up. This past weekend was spent celebrating the New Year with friends. As I said goodbye to Grandma this morning, she told me about the huge sculpture on display on Sarasota's waterfront, as part of the Sarasota Season of Sculpture. She said there has been "discussion" whether this sculpture, depicting that famous image which we now associate with the end of World War II, should be purchased by the City and remain in town.

I quickly grabbed her and we went down to the waterfront to see artist J. Seward Johnson's creation, titled, "Unconditional Surrender" (image on the left). The work is finely detailed, showing the seams in the nurse's stockings and wrinkles in the sailor's coat. Being of Grandma's era, she thought it was wonderful and told me how Grandpa's jacket looked like that, although he was in the Coast Guard and had a different emblem. I thought it was terrific for the playfulness and simple beauty.

We drove past the other sculptures, primarily all abstracts, and none evoked the emotion as this one. Visitors will be able to enjoy this and other sculptures through May 31, 2006.

The other image is from a fountain I finally had the chance to examine downtown. I had previously seen the fountain while driving Pineapple, or Lemon or Orange Avenues (one of those tropical fruits) but never got out to look at. I wandered down Lemon Ave. Monday during the Downtown Farmer's Market, which led to the fountain. Whimiscal fish, mermaids and other magical critters adorn the sidewalk surrounding the fountain and fountain itself.

Going home with eyes open I always see something new.

TulipGirl said…
Have you seen the war protesters by the statue? They congregate there pretty regularly. . .
January 03, 2006 12:34 AM

jhuber7672 said…
I recall seeing the war protesters by the waterfront frequently; but on this particular day, there were just a few awe-struck tourists, like me. Ranging from twenty-somethings to a couple who were from the World War II era (I asked).
January 03, 2006 7:39 PM