Could I Have Been an American Idol? 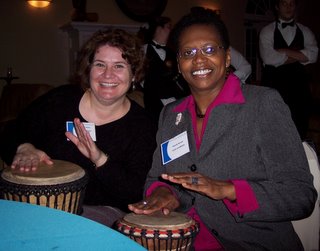 Probably not. I have no rhythm, no jive, no tune. Think I'm tone deaf - ask my fellow team members to Japan. Each time we had to sing at the end of our presentation, I could see the eyes roll and half-smirks when I would project my off-key voice. Worse yet was karaoke!

But, when I was a teenager, I wanted to be a rock star (which was after a phase when I wanted to be a postal delivery person then a witch). Yup, I used to write songs - originals and parodies. I loved playing air band (you youngins' probably don't know what that is) and fantasized about prancing on stage, touring the world and having platinum records.

Tonight, I didn't expect the rock star in me to emerge. The sales department was invited to a reception (for a single gal trying to make it on her own, free dinners are important). Following the "heavy appetizers" and cocktails, a group called the Drum Cafe handed everyone a drum. For the next hour, we banged our drums until our hands became numb.

If only Simon, Paula and Randy could have been there...

Anonymous said…
I totally did NOT roll my eyes at your off key voice. I thought it was hokey we sang even though they probably thought it was hysterical we made fools of ourselves. I also thought our fearless learder was a bit of a show stopper. ;) I thought kareoke was GREAT!!!
January 18, 2006 10:22 PM