Let Me 'Splain My Interest... 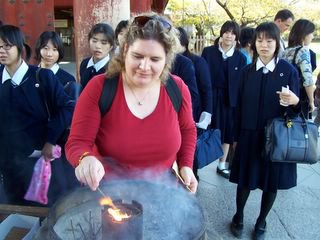 I find religion fascinating ~ the way it has controlled and maybe provided order to society over the centuries. I'm a confirmed Catholic, although being divorced, I'm really not welcomed there any more. I wonder what the Pope will say to me when I show up on his doorstep in a couple of years with a few of my pals - Annette and Val - you're still in, right? Anyway...

I grew up in a bi-religious home (is that the correct terminology?). Nothing drastic - my Mom is Catholic and my Dad is Lutheran. Being very young, I remember they asked me which church I wanted to go attend.

Prior to that, me and my siblings attended both churches and at the time, the only difference between the two that I could decipher was that the Lutheran church service seemed to last for HOURS while Father Hamerial at Our Lady of Peace had us out in 45 minutes. I did weigh the other benefits of attending my Dad's church, he was an elder and had status - which guaranteed prime seating and "the blood" (wine) was served in shot glasses while the Catholics shared a goblet. The church-goers seemed more friendlier than the Catholics and hung out afterwards with coffee and donuts.

But still, I chose the road to Catholicism and my siblings followed. All of us were confirmed; despite my younger sister questioning things (as we were supposed to do).

While working in Yellowstone National Park, I was introduced to the Campus Crusade for Christ (born-agains), Mormons (what kind of religion forbids chocolate??? But if you're in Salt Lake City, take the tour of the "compound," the history and theory is intriguing) and the cult Church Universal Triumphant (and what kind of religion protects itself with armed militants???). While working in the Everglades, I was introduced to different kinds of Buddhism, including Jain (who are very limited in their diet - no meat, no tomatoes and nothing that is grown in the ground - to avoid the worm poop, which is considered dirty). Recently, I've studied Wicca and sang alongside President Jimmy Carter at his Southern Baptist Church (ok, there were a few Secret Service Agents between me and him).

But, my month-long visit to Japan last year was truly life-altering. My first host-father designed and carved Buddhist furniture. I was taken to many temples and through broken English, limited understanding of the Japanese language and lots of hand gestures, I learned a little bit more about this unfamiliar religion. And how it all began with little Buddha sitting on the lotus leaf...

The image above was taken in Nara. It was supposed to go in last year's Christmas cards (ok - unintentional irony) but the cards never made it out.