A Fair to (kind of) Remember 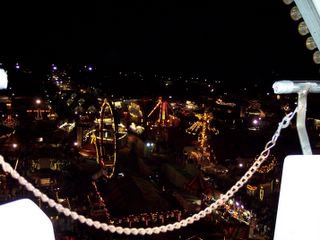 Tonight I experienced another one of Tallahassee's cultural attractions, the North Florida Fair. I used to love going to the local county fair when growing up in Buffalo. I've never been a fan of the midway - the rides and games - but more into the exhibits and livestock (ok, I'm a big geek!). I went with a group of friends tonight and although I didn't get to see any of the exhibits (we were too late to see them), I did have a good time.

Who wouldn't love the fair - the aroma of fair food - meats on sticks, fried doughs and wisp of sugary clouds (aka: cotton candy); the people watching - gals wearing 5" stiletto heals and their guys wearing sunglasses at 11 PM; breathtaking rides to replicate the feeling of flying.

My two highlights of the evening: