Are We All That Different? 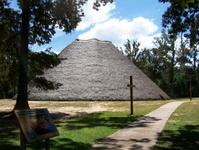 I visited Mission San Luis Apalachee in Tallahassee today, one of more than 100 mission settlements established in Spanish Florida between the 1560s and 1690s and a National Historic Landmark. As a mission, both Apalachee Indians and Spaniards lived here. In the early 1700s, the British settled into Charleston, SC and began making trips to Spanish Florida and destroyed the Spanish missions. Upon reaching Mission San Luis, they annihilated all buildings and it wasn't until 2000 when the first formal mass was held at the mission, since 1704. The rebuilding of the mission is credited to archeological who have been piecing together history through excavation.

In 1704, the Spanish turned Florida over to the Brits, forcing the Spaniards and all members of the Apalachee tribe to migrate to Cuba. It wasn't until 1996 that descendants of the Apalachee Indians, of the "Talimali Band" were discovered living in Louisiana. Various records indicate that following the dismantling of the mission in 1704, some fled to Mobile, AL vs. to Cuba and then eventually to Louisiana. It is estimated that about 250 - 300 members are alive today.

As usual, I became exhilarated from learning more about Florida's history. The whispering breeze rustled through the trees while insects buzzed with electrifying cracks to drown out 21st Century noises. Excavation plots dot the area along with costumed people playing the role of 16th century Christians (I was dressed as a 21st century heathen with my shorts, sandals and summer top).

One of the most fascinating discoveries I had, however, reminded me of Japan. The above photo is a replica of an Apalachee Indian community center, typical of the late 1600s and early 1700s. The photo here is of a Japanese house from Shijimizuka Ruins in Hamamatsu Prefecture, typical of 1,000 - 2,000 BC living quarters.

Thatch is thatch, but I saw similarities between the two. Certainly, the Apalachees of Florida had no way of going to Japan to study architecture and there really is only a few ways to build a shelter, but aren't the similarities something? As people, when it comes down to it, are we really different from each other?